iWatch Africa assessment of the newly proposed Valued Added Tax (VAT) structure can confirm that businesses will incur a tax burden of 5% despite claims by the government that VAT has not been increased under the proposed VAT structure.

The Finance Minister, Mr. Ken Ofori-Atta, during his presentation of the mid-year budget review on July 19th 2018 stated, “I wish to assure the House that VAT will not be increased despite some economic challenges,”a claim iWatch Africa finds misleading.

Mr. Ofori- Atta subsequently announced that the Health Insurance Fund Levy and the GETFund components from the VAT have been separated and will now have straight levies of 2.5 percent respectively.

What this means is that, the government now says it wants to make 5% (NHIL+GETFund) of the 17.5% VAT a flat rate tax. This means businesses cannot deduct this 5% component of the VAT incurred on their purchases. Therefore, based on the above example, instead of deducting GHC17.5 from GHC35, businesses can only deduct GHC12.5 from the GHC35 and will have to give GHC22.5 to the government compared to the GHC 17.5 they would have paid previously, incurring an additional business cost of GHC5.

Meanwhile, renowned Economist, John Gasti has agreed with iWatch Africa’s position arguing that, Ghanaians will now pay more for goods and services, following government’s decision to levy both the NHIL and GETfund.

“The burden of the people has been increased in disguise. What it means is that the flat rate is going to impose more burden on Ghanaians,” Mr. Gatsi stated.

Implications for businesses and consumers 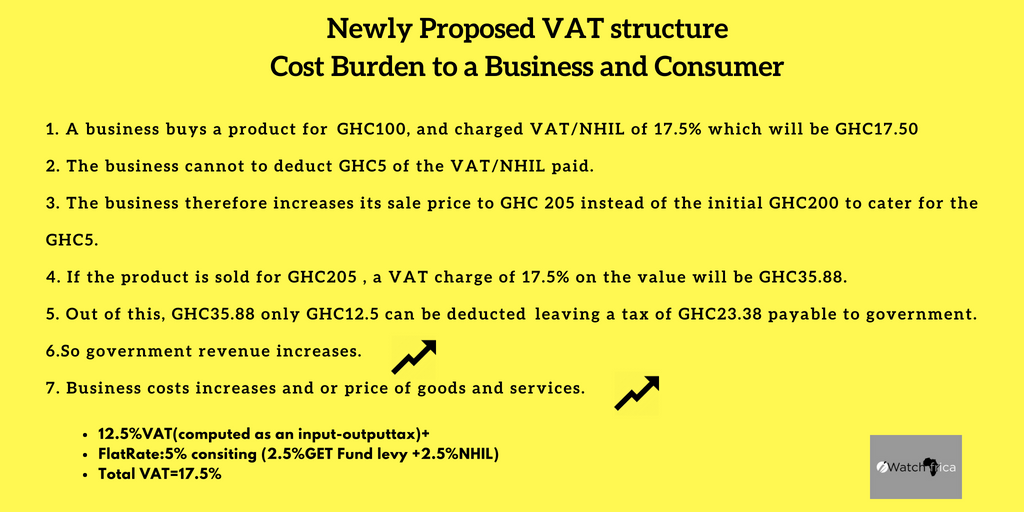 By restricting the amount of input tax businesses are allowed to deduct, government has found a way of increasing revenue, even though the marginal rate of VAT remains the same. Most business will have to decide whether to absorb this extra 5% charge, eating into their profit margins or pass this on to the consumer although the latter is more likely to be the case as businesses are assumed to be rational institutions.

It is expected that if the newly proposed VAT structure is approved by the parliament of Ghana, prices of goods and services would definitely go up while government revenue increases.

Gideon Sarpong is a policy analyst and media practitioner with over eight years of experience in policy, data and investigative journalism. Gideon is currently the Policy and News Director at iWatch Africa. His major role includes developing news strategy for correspondents across Ghana, as well as designing strategic project and policy focus for the organisation. He is an author; a fellow of the Young African Leaders Initiative (YALI), Thomson Reuters Foundation, Commonwealth Youth Program ,Free Press Unlimited and Bloomberg Data for Health Initiative. Gideon holds a degree in economics from the University of Cape Coast, a PgD in Fiscal Policy for financing sustainable development from the African Institute for Economic Development and Planning, in South Africa and a PgD in Policy Journalism and Media Studies from the University of Zambia. He is the founder and country president of SOA Ghana Hub. Gideon is a Policy Leader Fellow at the European University Institute, School of Trans-national Governance in Florence.
Check Also
Close
Follow Us On Facebook
Find us on Facebook
Most Read
Facebook Twitter WhatsApp Telegram
Back to top button
Close
Popular Posts
Most Commented
Recent Comments
.widget-title .the-subtitle { color: #000 !important; }
Close