iWatch Africa assessment of data provided by the International Organization for Migration (IOM) can confirm that an estimated 17,000 migrants have died since 2014 as a result of attempts to reach Europe through the Mediterranean.

The data also revealed that over 9000 of these migrants were of African origin. Though the death rate has reduced in the last two years, recorded death figures as at July 2018 indicates that over 2000 migrants have died this year alone compared to the over 6000 deaths in 2017.

So far, the African Union has failed to come up with a comprehensive strategy to stem the flow of migrants into Europe which would have helped prevent these deaths. The European Union has also struggled to agree on a solution to the migration crisis that has engulfed the continent. 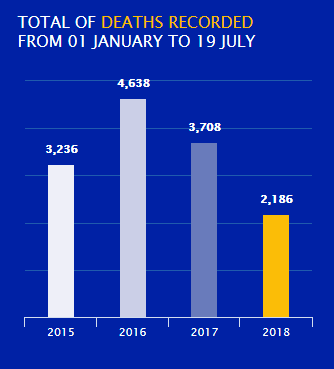 Gideon Sarpong is a policy analyst and media practitioner with close to a decade of experience in policy, data and investigative journalism. Gideon is currently the Policy and News Director at iWatch Africa. He is an author; a fellow of the Young African Leaders Initiative (YALI), Thomson Reuters Foundation, Commonwealth Youth Program ,Free Press Unlimited and Bloomberg Data for Health Initiative. Gideon is the Ghana Hub Lead of Sustainable Ocean Alliance. He is a 2020/21 Policy Leader Fellow at the European University Institute, School of Trans-national Governance in Florence, Italy and 2020/21 Open Internet For Democracy Leader. Gideon is also a 2021/22 Visiting Scholar/Reuters Fellow at the University of Oxford, UK and was selected as a 2022 TRF/Trust Conference Changemaker. Email: gideonsarpong@iwatchafrica.org
Check Also
Close
Follow Us On Facebook
Find us on Facebook
Most Read
Facebook Twitter WhatsApp Telegram
Back to top button
Close
Popular Posts
Most Commented
Recent Comments
.widget-title .the-subtitle { color: #000 !important; }