iWatch Africa investigation has revealed that failure of some six mining companies to pay dividends due Ghana deprived the nation of potential revenue amounting to $14,148,373 as at October 2018.

The government of Ghana under Section 43 of the Minerals and Mining Act of 2006, Act 732, has 10% Carried Interest in all mining companies registered under the Companies Act of 1963. These companies are required to submit on annual basis, their returns to the Registrar General’s Department and the Minerals Commission as well as conduct annual self-assessment and submit same to Ghana Revenue Authority for tax purposes.

iWatch Africa’s review of the financial statements of these mining companies: Chirano, Adamus, Gold Fields Abosso, Persus Mining, Ghana Manganese and Ghana Bauxite revealed that although in certain instances declared profits, they failed to transfer dividend attributable to the government.

Further checks by iWatch Africa at the Auditor General’s office also showed that these companies failed to obtain the needed prior approval from the Ministry of Finance for the plough back of the profit.

The Auditor General, Mr. Daniel Yaw Domelevo in his 2018 report revealed the absence of government representation on the boards of these mining companies, despite government ownership of 10 percent carried interest.  According to the Auditor General, this “inhibits oversight functions and possible cause for cost manipulation by the mining companies.”

Another concern noted by iWatch Africa when reviewing the financial statements of these companies was the staggering losses recorded by almost all the companies between 2013 to 2016.

The Auditor General has cited the possibility of “inflation of expenditures through transfer pricing manipulations,” as reasons for these losses, and blamed the Ghana Revenue Authority for their weak oversight responsibilities.

The table below shows the profit/loss after tax (PAT), dividends declared and potential revenue due the state between 2013 and 2016. 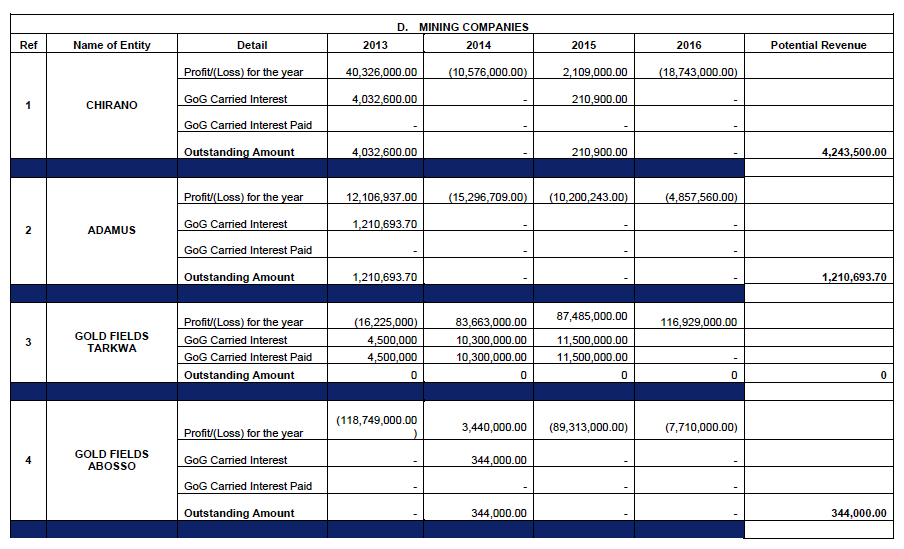