The Ocean is considered to be the Earth’s life support with over half of the world’s oxygen being produced by it. Undoubtedly, there is indeed heavy reliance on the world’s ocean. Amongst other things, it helps regulate the climate, and absorb carbon dioxide from the earth.

The ocean also serves as a source of livelihood for many people especially those in the business of fishing. However, the ocean risks becoming dead as human activities are causing nearly irreparable damage to it.

A 2019 report by the International Union for the Conservation of Nature (IUCN) suggests that “pollution around coastlines was having a significant effect on oxygen levels, with fertilizer and agricultural runoff promoting more algae growth, which in turn depletes oxygen as it decomposes.”

It is even more worrying as several studies have predicted that by the middle of the 21st century, there will be more plastic than fishes in the world’s ocean.

In Ghana, some of the effects of pollution in the ocean are already being seen as fisher folks are catching more plastic than fish.

Also, outboard motors of these fisher folks, fixed on their canoe to help them navigate on the sea are suffering as their operation is interrupted by the solid waste in the ocean.

A Sunday visit to Jamestown, one of the coastal towns in the capital city revealed that fishermen were having more troubling experiences on the sea in their expedition to catch fish.

At about 2:35PM, a fishing canoe, painted with the colours white, red, green, and black and had Psalm 51 boldly scripted on it, spent over 30 minutes before being able to safely at the shore.

About 50 metres from the shore, the fishing crew on the canoe had to explore various life-threatening means to get the canoe ashore amidst heavy tides.

One of the crew members, Seth Nii Ashiagmor Tagoe, tells SOA Ghana that their outboard motors always suffer damage due to the pollution in the ocean.

“When we are going to fish every day, the rubbish in the sea always breaks down our machines. The fan under the outboard motor moves faster when it comes into contact with refuse in the water. One time, our canoe nearly got wrecked due to this problem.

“There have been a lot of accidents because of the rubbish that is breaking down our outboard motor. Most of the canoes here have been involved in many accidents; most of them are now unfit to go fishing. Some of our fishermen take loans to buy some of these canoes and before they finish paying off the loan, the canoe breaks down,” he said.

Another fisherman, Charles Crabbe, who spoke to us, expressed worry over how unproductive they have become over the years, a situation he also blames on the pollution of the ocean.

He says that even though they individually make efforts to gather the waste that washes ashore, they eventually find their way into the ocean again as waste management companies fail to find more appropriate ways to deal with the situation.

“Zoomlion sometimes comes for the refuse. When they come for it, they sometimes put it in a container and they leave some. So the rain washes them back into the ocean… People always come to clean this place but they are not enough” he said.

Concerning plastic waste, Mr. Crabbe told us that after gathering them, “some people come to weigh them and take them away”

During this Sunday visit, Mr. Crabbe and three others were busily trying to catch some fish.

Although they had spent several hours, they could not boast of having a good day.

Mr. Crabbe, who claims to have been in the business for over 15 years, told us that the situation was worsening.

According to the Environmental Protection Agency, about 2.58 million metric tonnes of raw plastics are imported into the country annually.

Of that, the UN estimates that about 5percent are recycled whilst 28% end up in the ocean.

The picture may look gloomy but there is a bit of hope as various groups and individuals have dedicated themselves to addressing the issue from their corners.

At the University of Ghana, which is the country’s premier tertiary institution, a Plastic Recycling Project has been established.

The student-led initiative with support from the Vice-Chancellor of the University, Prof. Ebenezer Oduro Owusu, is expected to be a continuous and permanent project on the main and subsequently other campuses of the University of Ghana.

It is also aimed at creating an attitudinal change towards plastic waste by instilling a culture of source segregation and recycling of plastic waste to aid the greening of the University of Ghana Campus.

At an April 2019 Congregation ceremony, the Vice-Chancellor of the University announced that volunteers from the University of Ghana Plastic Recycling Project had collected over 14 metric tons of plastic waste on the university’s campus for recycling.

There are also quite a number of young people in the country who are recycling waste, just so they do not pollute the ocean.

This story was produced with support from Sustainable Ocean Alliance Ocean  Solutions Micro-Grant. 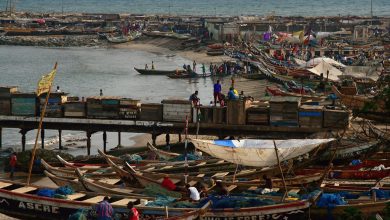 Charles Faseyi writes: How pollution threatens the livelihoods of coastal communities in Ghana