The coastal area of Ghana is home to several ecosystems which provide several services to the people living in the area. These ecosystems include the mangrove ecosystem, lagoons, estuaries, beaches, and the sea. Coastal communities depend on the services which could be provisioning, regulating, supporting, and cultural from these ecosystems. The benefits from these ecosystems form the livelihoods of these coastal communities. Livelihood as described by Wikipedia is “a means of securing the basic necessities of life”. These activities encompass the benefits of the environment to the coastal communities and these could be threatened and severely impacted when the environment is no more conducive or healthy due to pollution.

This menace called “pollution” is attributed to the action of individuals/entities who make use of the environment in an unsustainable way, thereby introducing pollutants into the environment.  Some of the actions that result in pollution in the coastal area of Ghana are discussed below;

Ghana is known to be the largest gold producer in Africa after South Africa. Gold mining in Ghana was the reason the country was named “Gold Coast”. The sector according to the International Trade Administration in the year 2020 has since attracted international investment since the country’s Economy Recovery Programme in 1983. The sector accounts for about one-third of the revenues generated from exportations and also contribute to the Gross Domestic Product (GDP) of the country. About 95% of the total mineral revenue by the country is from the gold mining sector.

Gold mining is however a threat to the environment where they are done. Lands are been degraded due to the mining activities and as a result several endemic species of both flora and fauna are lost. The majority of the water bodies in Ghana especially water bodies in the Western and Ashanti regions are seriously threatened by the mining activities. The water bodies have been rendered uinhabitable to aquatic life and their use by humans for their livelihood activities has greatly been affected. Of the three-river system in Ghana (the Coastal, Volta, and South-western River system), the Volta-river system appears to have less share of the impacts of the mining activities. The Southwestern Rivers (Pra and Ankobra) are seriously impacted and are unfit for any use as the mining activities have led to the siltation of the water bodies resulting in aesthetic impairment and benthic habitat destruction. Several species of shell and finfishes are no more found in the rivers. In an interaction with the people of Anlo (Shama district) community, they said  “we do harvest oysters in our waters before, but now oysters are no more here”.

The people of Anlo previously depended on the water from the Pra River as groundwater in the coastal areas is saline due to seawater intrusion. Now, they struggle with good water supply for their daily activities. “We cook and drink the water in the past, but now we cannot even use the water to wash our clothes not to think of cooking and drinking it” the people of Anlo expressed bitterly.

Furthermore, in countries where aquaculture and mariculture are practiced, the rivers and other coastal waters are very important in the industry, but in the case of Ghana, the industry is experiencing serious challenges from water pollution due to mining activities. The adjacent ocean and estuaries are not left out, as the quality of these water bodies is degraded and made uninhabitable or unconducive for aquatic life. This therefore has implications on the fishery industry as fishermen who are used to fishing in the coastal waters have to travel far (to other communities), move farther into the sea, or migrate to other countries for fishing, costing them much. For instance, going farther into the sea requires the purchase of inshore vessels or industrial vessels. In cases where these options are beyond their reach, they have been rendered jobless.

Improper waste disposal in the coastal areas has been a culture of so many in developing and underdeveloped countries. The case of Ghana is not different as communities along the coast are found disposing their wastes directly into water bodies without thinking about the implication of their actions. Mr. Kojo Nyamekye, a fisherman in Elmina said in an interview: “some of the wastes are being swept into the lagoon and the sea by the people while some of the wastes are brought from their homes and disposed into the sea”. In some areas, people dispose of their waste directly into drainages and when it rains, the waste is washed into rivers and other water bodies. Some of these wastes end up blocking drainages and lead to flooding of the communities. These wastes are from both domestic and industrial sources. Plastic and other polymers are major components of the wastes. Mr. Kwame Ackon, a fisherman and carpenter at the Elmina fish landing site confirmed that most of the wastes being caught along with fish were mainly plastics and other polymers. He added, “some people take wastes to the sea while others bring wastes from the sea in form of catch”.

Sewage and sludges are mostly disposed into water bodies as industries and residential homes see the water bodies as the most convenient place to dispose of their wastes. Several drainages are been channeled into the Benya lagoon and Fosu lagoon in Elmina and Cape Coast respectively. Recently Fosu lagoon was dredged to get rid of some wastes and allow fresh water to enter into the lagoon but waste disposal into and around the lagoon has not stopped. Toilets are channeled into some of these water bodies and fecal wastes are emptied directly into them.

Open defecation is the practice of defecating or excreting outside or in an open space instead of a toilet. These open spaces include beaches, bushes, canals, rivers, and other water bodies. It is a habit commonly seen among people living along the coasts and water bodies in developing countries like Ghana. Males and females come out in their numbers to defecate at the beach especially in the early hours of the day. As seen at Sawuma  (Nzema East, District), males and females have different sides of the beach where they do “their thing”. Women were seen using the secluded part of the beach while men use the open beach. Open defecation in the coastal communities is majorly caused by inadequate private and public toilet facilities and also some attitudes where some people preferred the open space than using the toilet facilities. Some of the people expressed, “we enjoy the fresh air or the breeze at the beach when defecating”. Another way that is quite different from using open space is “defecating into rubber bags, papers, and plastic containers and pouring them directly into the water”. Mangrove patches and bushes around lagoons are mostly used by the people as their toilets where they defecate whereas in some cases, pits are dung in the mangrove patches and their excreta are dropped into the pit. For people living around river estuaries, sometimes they directly do it into the water or dispose of it using plastic containers or rubber bags. Open defecation in the coastal areas has been linked to a lot of health issues and diseases like cholera, child mortality, poor nutrition, and poverty resulting from livelihood threats. 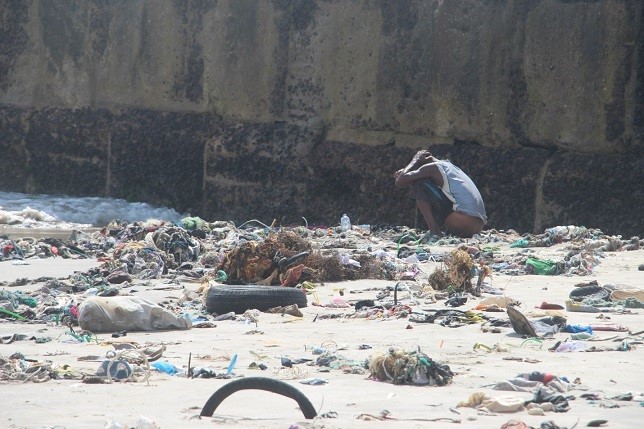 The use of chemicals in agricultural practices is widely done in Ghana. For example, the herbicides used in the clearing of lands, pesticides used in the fumigation of cash crops especially cocoa, pineapples, and watermelons. Some of the people interviewed in a survey at Anlo, Shama district, identified some of these chemicals as threats to their environment as they affect non-target organisms and sometimes they are washed into the water bodies. In response to this, Mr. Kojo Nyamekye said “some fishermen make use of chemicals when fishing in the sea and other coastal water bodies”. Many fishermen are engaged in destructive fishing using chemicals and detergents mixed with explosives in fishing in the country. The Association for the Sciences of Limnology and Oceanography (ASLO) global outreach programme that was carried out recently by the Department of Fisheries and Aquatic Sciences (University of Cape Coast) on educating the students of Ampenyi M/A Basic School on the theme “Environmental education towards the conservation of Biodiversity in the Brenu Lagoon Ghana”, students were asked in the course the programme the sources of pollution to Brenu Lagoon. It was surprising to hear a student mentioning Dichlorodiphenyltrichloroethane (DDT). DDT is an insecticide used in agriculture that has been banned in the United States in 1972 but is still widely used in this part of the world with long-lasting adverse effects on the environment.  The insecticide is also used in the country in controlling mosquitoes. In addition, the use of fertilizers and other chemicals in agricultural and fishing practices has adverse effects on the environment as they pollute both surface and underground waters, and these elicit some health issues in the humans who directly or indirectly depend on them. Fish (es) caught with chemicals when consumed by humans could have both acute and chronic health effects.

Other effects of pollution threatening the coastal communities are:

Read Also: Garbage Out, Garbage In: How Europe’s e-waste problem is a burden on Africa

Marine contamination is a major hazard to our ocean. Is there a solution to the problem of marine pollution?. Humans are both a part of the problem and the solution to ocean pollution, whether they live near the shore or far inland. We can all contribute to reducing the amount of pollution entering our oceans by changing our attitudes and everyday habits.